We believe everyone enjoying a stay with us will feel like they own Silkbush Mountain Vineyards, even if it is only for a few days. You will be comfortable in the air-conditioned cottage, with a cast iron stove in the living room,  heated slate floors, an outside braai, firewood, and outside chairs and table, as well as an ironwood dining room table and a large hot tub.

There are two bedrooms in the back of the cottage to enjoy spectacular mountain sunrises. The kitchen is fully equipped, but if you do intend to have meals in, be aware that large, modern grocery stores are at least a 35 minute drive, way too far to run for a quart of milk. We have several recommendations for dining from a local pub (throwback to the past) to fabulous dinner, lunch and breakfast places. You will be treated well wherever you go in this valley for a meal or camaraderie.

There is lots more detailed information on the Silkbush website about how to book a stay, recommended restaurants, other local wine estates to visit, multiple things to do and maps to help you get around.Naturally Franci and Anton and their family who live on the property (about a mile downhill) will welcome and assist you. The story behind naming our guesthouse 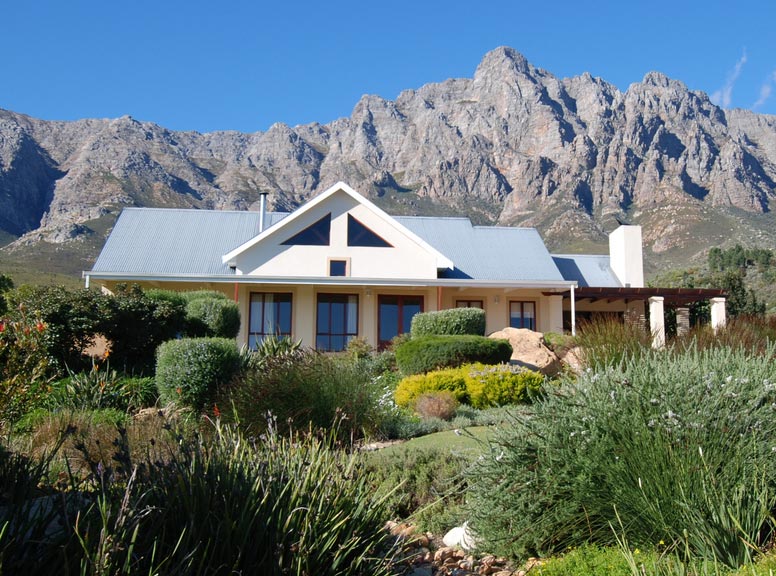 Tom Kingsbury grew up in Rochester, Minnesota, raised a couple of great daughters, and became a software systems analyst for  various airlines. Along the way, Tom developed a taste for good wine and became an early partner in the Silkbush vineyard development; he visited South Africa in 2001and was awed by what we were building in the Breedekloof mountains. He served for a number of years on our Advisory Committee, always provided astute observations and suggestions, and was ready to come to Silkbush and help out by driving a grape delivery truck at harvest. A better partner is hard to imagine.

However, in early 2007 Tom was diagnosed at Rochester’s Mayo Clinic with inoperable pancreatic cancer. He passed away that August. We had already decided to name our guest house, then under construction, the “Kingsbury Cottage,” after this remarkable and enthusiastic man.

Before he died, we called Tom to tell him about our decision; in a very weakened voice, he said, “I would be honored.” Likewise, old friend; you honored us with your manifold contributions during your altogether too brief a stay.